Italy produces a dazzlingly diverse array of wine styles, from world famous reds and whites, to luscious sweet wines and quality sparkling wines. It has a long and proud history of wine production, with native grape varieties dominating the scene. To an outsider, deciphering the average Italian wine label can seem a bit complicated, not to mention having to get your head around all the different grape varieties (there are over a hundred in commercial use today) and legal classifications. While it’s impossible to cover everything, here’s a quick tour of the most important Italian wine regions so you can choose your next bottle with confidence.

The basic quality designation for Italian wine is Denominazione di Origine Controllata (DOC), which is largely similar to the French appellation d'origine contrôlée, and sets out the rules that winemakers must abide by (for example, grape varieties, permitted yields and production methods). There is also a higher classification reserved for the best wines, DOCG, with the G standing for guarantita or guaranteed. Currently, there are 330 DOCs and 70 DOCGs in Italy. Underneath this there is another, less strict, category called IGT or Indicazione Geografica Tipica. Anything else is classified simply as table wine.

The most important wine region in the North West is Piedmont, where the great red grape Nebbiolo reigns supreme. This late ripening variety produces its greatest wines, Barolo and Barbaresco, around the town of Alba, where the unique microclimate suits Nebbiolo perfectly.

Source: italianwinecentral.com Barolo must be made from 100% Nebbiolo and tends to be a deeply concentrated wine with pronounced tannins and acidity, making it capable of ageing for many years. Other notable grapes of the area include the fresh and fruity Dolcetto and Barbera.

Veneto in the North East of Italy is home to big hitters, Valpolicella and Amarone, which are both made from a blend of  the local red grapes, corvina, corvinone and rondinella. Amarone is a big and mighty full-bodied wine, its richness coming from the addition of partially dried grapes (or appassimento), which gives the wine incredible concentration and intensity. Traditionally Valpolicella can be fairly light in body, although Valpolicella Ripasso is a much richer and fuller bodied style as the juice is passed over dried Amarone grape skins during fermentation. Not to be outdone by the reds, Veneto is also known for its local white grape, Garganega which produces Soave, sometimes compared to Chardonnay due to its richness. And love it or loathe it, we can’t mention Veneto without talking about the ubiquitous Prosecco. This fresh, fruity and often sweeter style of sparkling wine is made from the Glera grape using the Charmat or tank method. The best examples come from the hills between the towns of Conegliano and Valdobbiadene.

Tuscany in central Italy is the heartland of the red grape Sangiovese and one of the most famous wines in the world, Chianti. The hills of Tuscany provide perfect growing conditions for Sangiovese, however in recent years international grapes, such as Cabernet Sauvignon and Merlot, have flourished in the warmer climate. 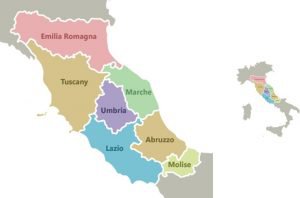 Source: italianwinecentral.com   The blending of these grapes with Sangiovese gave rise to the so called Super Tuscans, who although excluded from DOC status, nonetheless can command top prices. Sangiovese can be temperamental and requires careful handling, but can produce high quality wines in the right conditions. Names to look out for include Chianti Classico and Brunello di Montalcino where Sangiovese is particularly successful.

Abruzzo is the home of the red grape Montepulciano, referred to as Montepulciano d’Abruzzo and not to be confused with the Tuscan Vino Nobile di Montepulciano which is actually made from Sangiovese (see, it’s not confusing at all!). Montepulciano produces an array of wines, from your everyday easy drinking bottle in front of the tv, to truly outstanding examples. It tends to be a deep coloured wine, with blackberry, spice and earthy characteristics. Abruzzo also produces a quality rose from Montepulciano called Cerasuolo (literally meaning cherry red) which has had its own DOC since 2010.

Sicily’s warm climate lends itself to the production of rich, deep and flavourful red wines, the most notable being made from Nero d’Avola, although international grapes such as Syrah are also gaining a foothold. The island has recently earned itself the nickname ‘The California of Italy’, possibly due to the large scale wineries, but also no doubt in part due to the crowd pleasing, bold style of wines it has become renowned for.

This has been somewhat of a whistlestop tour, but with a country as diverse as Italy, it’s impossible to cover every wine. What is clear is that whatever style of wine you enjoy, Italy has something to offer. From crisp, light whites like Pinot Grigio and Gavi, to more aromatic styles like Verdicchio, Italy covers it all. Likewise, while Prosecco may grab all the headlines, Italy is the home of some phenomenal sparkling wines, such as the traditional method Franciacorta which has DOCG status. Lovers of red wine are equally spoiled, as Italy produces everything from the light bodied Bardolino, to the inky Primitivo (or Zinfandel) and as you’d expect, Italian wines are just made to go perfectly with food.    If this has piqued your interest, you can explore our Italian wines and discover something new, you might just find a new favourite!